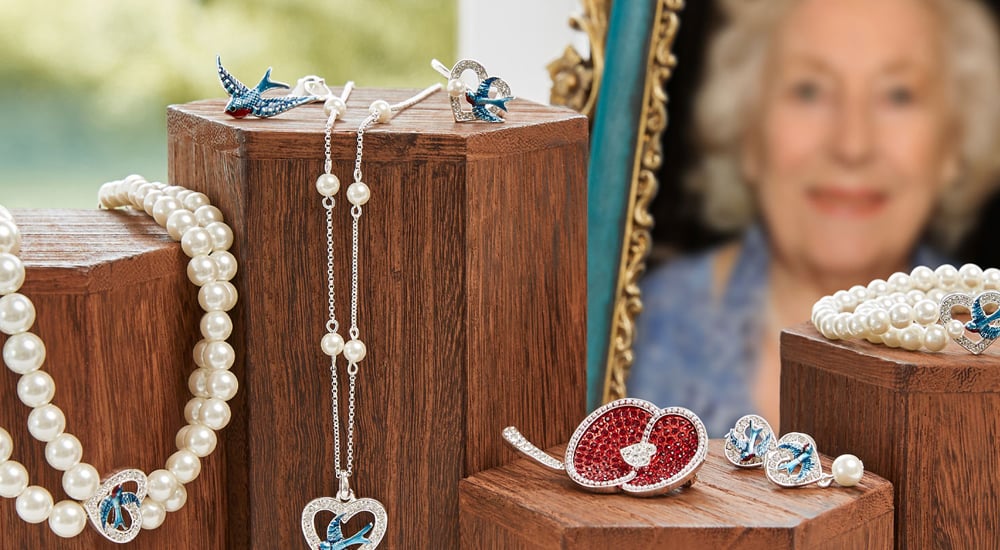 To mark the centennial anniversary of the Royal British Legion, The Poppy Shop is delighted to announce an exciting collaboration with Virginia Lewis-Jones, who has co-designed a commemorative jewellery collection and poppy brooch in memory of her late mother, Dame Vera Lynn.

Inspired by the themes of family, friendship, and of course, her mother's love of pearls, the new Bluebird collection encapsulates Dame Vera Lynn's glamorous spirit and her love of the Armed Forces. Each piece in the new jewellery collection features pearls and a signature heart, which houses a small Bluebird motif, paying tribute to one of her biggest hits during the Second World War, The White Cliffs of Dover.

Known as ‘The Forces’ Sweetheart,’ Dame Vera Lynn travelled to many countries to entertain the troops, singing some of her well-known songs, including ‘We’ll Meet Again’, which paved the way to become one of the most successful recording artists in history.

As her daughter Virginia recalls, “My mother never left her wartime roots behind. She continued to work with and support veterans and military charities, including the Royal British Legion throughout her life, so it was important to capture the essence of my mother and pay tribute to her own service in this collection. That’s why each piece features a miniature Bluebird or a reference to one of my mother’s iconic songs.”

In addition to the Bluebird collection, we worked closely with Virginia to design a crystal and pearl poppy brooch.

This heart ring features a crystal heart incorporating the iconic bluebird motif, and some signature pearls.